The smell of chestnuts and sweet potatoes roasting on an open fire are in the air. The holiday lights are strung all over Barcelona, the ice rink is being built in the Plaza Catalunya… That means that the holiday season is getting started and you should all start thinking about CHRISTMAS. But what does Christmas imply for the people in Barcelona? Many things, among them, some strange and wonderful customs that to the Barcelona people are as normal as turkey in Thanksgiving, but to everyone else, it’s just plain weird…

1. CAGANER (the gag figurine in the Catalan Nativity set)

One of the strangest characters in the Spanish Christmas tradition is the Caganer (roughly translated as “the pooper”). This little guy, classically dressed in the traditional Catalan garb, is a small figurine of a man with his pants down…well…pooping. This figure is often placed in the Christmas Nativity set… you know, maybe behind the manger where Jesus is being born or behind a bush. Building a nativity set here in Spain is a very common practice in general. Some Nativity sets are huge and take months to put up, but the best part about the set is the joy gained when you find the “caganer” hidden in the back amongst the cows in the barn while Jesus is being born and the angels are floating around. But do keep in mind that the caganer is not meant to offend! It is all in good fun of the Christmas spirit and gives a little humour to the holidays. It also could be interpreted to symbolize man’s humanity. Even when miracles happen…well…nature happens too. Another great thing about the caganers is that these days they come in all sorts of forms. The example that I have here is an enormous caganer that Barcelona had installed in the Maremagnum mall. I have seen various presidents (Obama included), famous figures (Madonna or Michael Jackson) Hello Kitty or Spongebob Squarepants…even Messi! These little guys make a great souvenier of your time here in Catalunya as they are only available during the Christmas season. 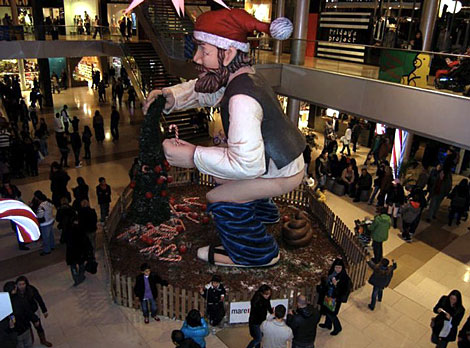 This is something that looks sort of like Santa Claus but in a strange, wooden, petrified smiley face form. The Caga tió is usually a log with a painted happy face on one end. The Caga tió log is usually dressed with a santa hat or a traditional Catalan “barretina” and it stands on either two or four legs. How the caga tió works is that on December 8th, Catalan families often buy a small caga tió. The children then leave the caga tió food to eat while they sleep, and gradually the caga tió is exchanged by the parents for bigger and bigger logs as the caga tió “grows fat” from eating the food the children leave out (other families just buy a big Caga tió from the beggining). Traditionally on Christmas day, or in some families on Christmas Eve, the family would put part of the log in the fire and the children would then beat the tió with sticks and sing songs to entice the caga tió to “poop” gifts like sweet chocolates, sweets, fruit and small toys. In modern day Catalonia, considering that fire and children should NOT go together EVER, they cover the Caga tió’s behind section with a blanket and secretly hide the toys under the blanket when the children are not looking. Then the children hit the Caga tió with sticks in his “belly” or his back (its a little bit easier) so that he can poop out the gifts. What a surprise when the Caga tió “poops” out chocolate eggs with toys inside, or little toy cars! I love my chocolates pooped out of a log! 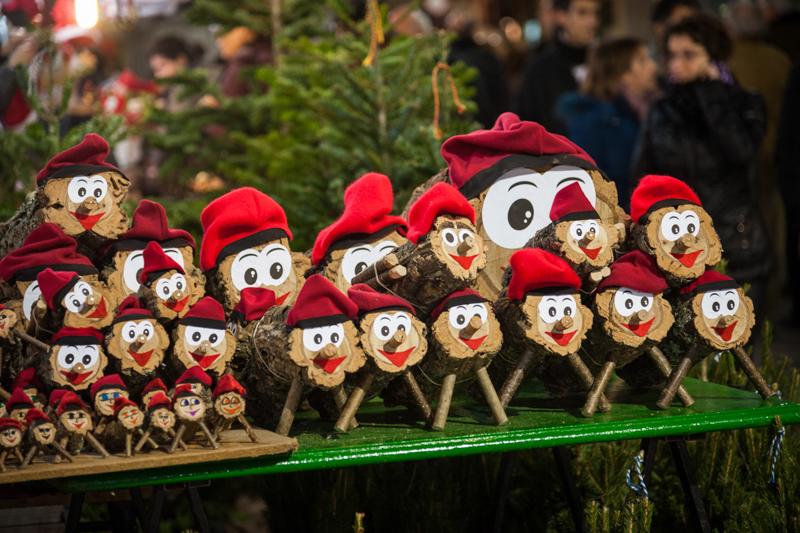 This tradition isn’t actually WEIRD per say, but rather, quite lovely. There is nothing better to get you into the holiday spirit than various open air markets where you can find trinkets and decorations for the holiday season. Various types of caganers may be bought (last year I found one of Bill Clinton, George Bush and President Obama…yeah America!). Caga tiós may be bought along with various peices for your Nativity set, Santa Clause figures, toys, lights and Christmas trees. The ferias are happy places and take buying holiday things into the street where you can just feel the energy of the people buzzing around you. It also helps that there are various stands open selling sweets, churros and chocolate as well…you know, to keep your energy level up… 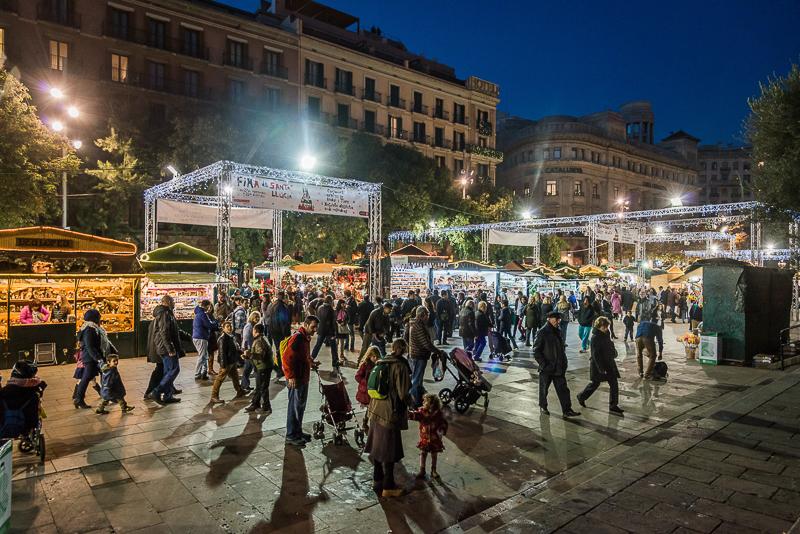 If you are unfamiliar with the story of the three kings from the birth of Christ, it is said that three kings: Melchior, Caspar and Balthasar followed a guiding star from the orient until they reached Bethlehem, Christ’s birth place, with gifts from their foreign lands. One rode a camel, the other an elephant and lastly, a horse. These three kings are very popular in Spain and every January 5th, the kings come to port in a big ship (La Santa Eulalia) into the Portal de la Pau in Barcelona. There, they meet Barcelona’s mayor who gives them the key to the city which “opens every door in Barcelona.” The kings make a big speech about being good boys and girls, and gifts are usually given to those eager children patient enough to stand through the speech, and then the kings go off to wait until the parade through the city that night. On the 6th then, the kings would have passed by all the children’s homes and if the children were good, they would recieve the presents that they had asked for. If they were naughty that year, the children would recieve lumps of coal. The weird part of this tradition is that the “carbon” the coal is edible and tastes like really crappy candy. Yes, I say this from personal experience. You DO NOT want coal for Christmas. Yuck!

Another really beautiful or weird tradition of the Three kings is the giving up of the “chupete” of children who are growing up. Its a good way to get your stubborn or dependent child to give up their pacifier in a positive way. The children give their precious chupetes to the helpers of the three kings and in turn recieve handfuls of candies and blessings from the kings themselves. These chupetes will be given to other little babies (not actually given to anyone!) so your kids can feel both grown up and charitable at the same time. Ah, the holidays…. 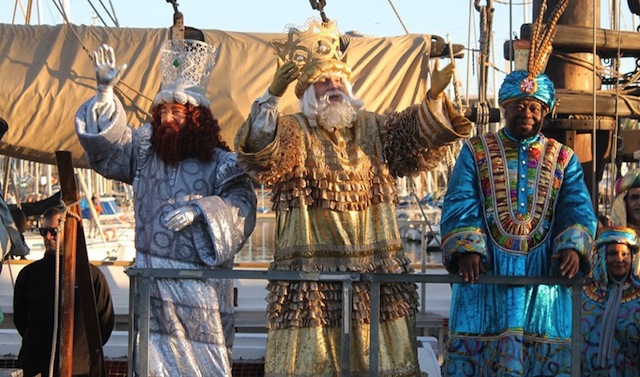 6. The Three Kings Parade (even better than Disney land)

After the arrival of the Three Kings in the Barcelona port and their address to the people of Barcelona, that evening the Three Kings’ parade commences. The parade is full of fireworks, dancing and music with different levels of parade floats reinacting the worlds of the three kings (African, Indian and Persian). There is said to be almost 15,000 kilos (33,000 pounds) of candy given out. They even have candy available for those children that are yeast intolorant. The parade in general is absolutely amazing and emotional to watch for people of any age. Once the parade is over, the children fill their shoes with hay for the animals of the three kings and the next morning, instead of hay they find treats, or coal, according to the behaviour of the child that year.

Here is a video from La Vanguardia that is in Spanish but you can see clearly what I am talking about. My favorite part of the parade is the end when the spooky halloween-like death train comes out and the miners on the cart sing “carbon! Carbon!” reminding the kids to be good else they receive “carbon.” The song is really catchy!

This is actually a very important tradition in Barcelona. It is almost as important as the Christmas tree. The Christmas noodle called the “Galet” is a noodle that is put in a soup that is generally eaten during this holiday time. The giant noodle statue is placed in various popular places in Barcelona and is lit up from the inside. Most people like to take pictures with the noodle, but in any case, it is one other hint that the holiday season is coming up. 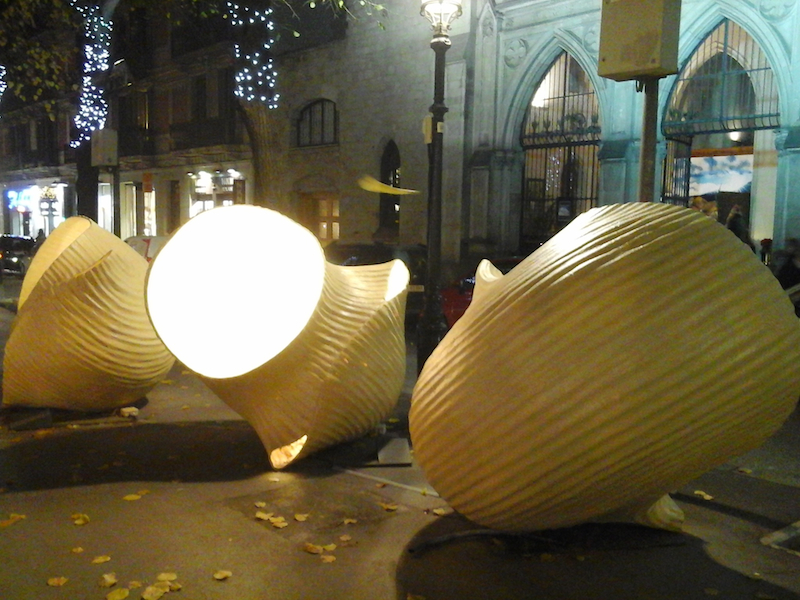 8. A real Holiday for leftovers

The Catalan people have a reputation of being shrewd with their money. That means not wasting money by wasting perfectly good food! On the 26th of December the Catalans then celebrate the Feast of San Esteban in which they make traditional cannelloni: a pasta rolled into a sushi-like shape and filled with left over meat from Christmas Eve and Christmas Day. You can get together with your family and finish off packing on the pounds that you left during Christmas eve and Christmas day. 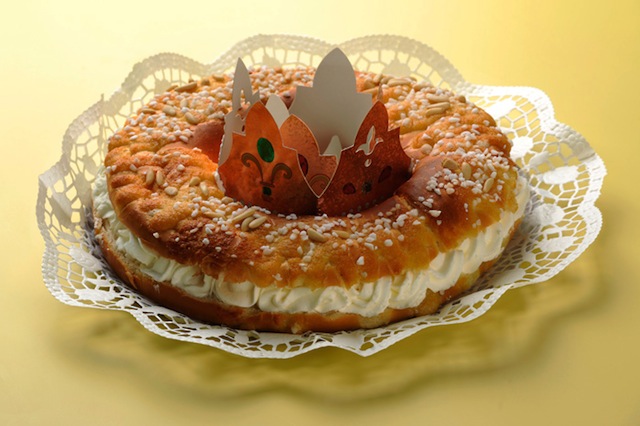 A great holiday tradition for the 6th of January, after the excitement of the presents from the Three Kings, the family shares a big luncheon where they have “El Roscon de Reyes” for dessert. This is a circular cake with a cream filling in which a figurine of a king, and a raw, dried bean is hidden. Everyone searches their peice of the cake to see if they recieved the king, or the bean. The person who has the king gets to wear the paper crown that comes with the Roscon for the whole day and is named the king. The person who gets the bean has to pay for the dinner…oops!

On the 28th of December, the Spanish people celebrate the Feast of Los Santos Innocentes. On this day, people play practical jokes on one another making the other person the “inocente,” sort of like an April fools day but instead of screaming “April fools!” You say “inocente!” The history of the celebration is actually quite macabre as it acknowledges the masacre, mandated by King Herod, of the first born sons of the families in Bethlehem. These children are said to be the first martyrs for Christ. Of course, turning that terrible historical fact into a funny holiday is just the ticket to get us into the giving mood.

Obviously, cultures vary greatly from country to country. What one culture may think to be the absolute norm is very strange for another, but if we keep an open mind and we travel, we get the chance to do things that we have never done before and enjoy our holidays, our lives and time with our families in new and exciting ways. Let me know if you know of any other cool weird customs from your country.

Your choice in Barcelona

Barcelona is a city famous for it’s food, culture, and tourism, but before you set out here to stay for a while, here are some tips on the Barcelona lifestyle so that you can be “in the know” before you go.

Barcelona is the perfect destination for travellers who want to live a fantastic vacation including both cultural richness...

In Barcelona, You Stylish Apartments will always be waiting for you!

Drinking is a social thing. We all know this. You can enjoy the taste of a nice fruity mixed drink, you can be “happy” with other people, it can help you relax, dance and let loose.